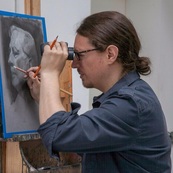 David Jon Kassan is an internationally recognized contemporary American painter, filmmaker, and philanthropist best known for his life-size representational paintings, which combine figurative subjects with abstract backgrounds or “tromp l’oeil texture studies. Kassan is a much sought after drawing and painting instructor because of his steadfast commitment to the age old discipline of working from life and creating compelling expressions of the human condition. He has given painting/drawing seminars and lectures at various institutions, and universities around the world. In 2013, he founded the Kassan Foundation in hopes of giving grants directly to underprivileged talent in both the visual and musical arts. Kassan works can be seen in many public and private collections worldwide. He is represented by Gallery Henoch (Chelsea), New York, NY and The Maxwell Alexander Gallery in Culver City, CA. Kassan lives and works in Brooklyn, New York. 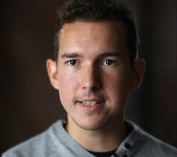 Kyle Lambert is a British Visual Artist who is known for his digital painting and illustration work created with the iPad and Mac. Kyle originally trained as an oil painter and went on to study for a degree in Illustration with Animation. Kyle has spent the past 5 years combining his passion for art and technology, producing illustrations and paintings for film, television, advertising and print. Kyle's recent photo realistic iPad portrait of Morgan Freeman created an internet sensation. It received over 13 million views on YouTube and continue to attract global media coverage on iPad paintings. 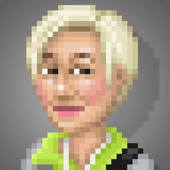 Susan Murtaugh, aka suzi54241 on Flickr, is a graduate of the Chicago Academy of Fine Art. She's worked over 40 years in advertising and graphic design, including 25 years as Principal of her own design firm. She’s used every traditional art medium. Since 2009, her preferred tools are her iPod Touch and iPad. She’s been featured in several group shows, online galleries, workshops and in local and international news. Her work and tutorials have been featured in Digital Artist Magazine and online. She has curated several international digital art shows, She loves teaching others the joys of mobile digital art. See her work here! 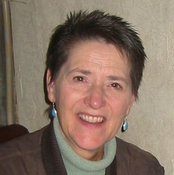 Jo Killen, MA in Art Education from Manhattanville in New York. She brings years of experience in art teaching varying from pottery and sculptor to commercial art as graphic designer, illustrator and art director. She also worked as a project manager at Hewlett-Packard for 15 years. She is currently the exhibition chair and president of the Board of Pacific Art League, Palo Alto. 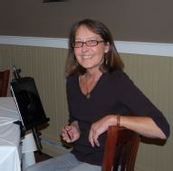 Corliss Blakely, an established professional artist and seventh generation Vermonter, paints still lifes and landscapes in a classically realist style. Corliss received her formal art training in Boston where she studied at the Vesper George Art School and The Museum School Of Fine Art. Corliss is an internationally recognized artist for her work in several media, including watercolor, oil, and egg tempera. Her paintings hang in collections worldwide. She is now painting on the iPhone and iPad, which has “opened up a new world for artists,” she says. “The world is changing and artists now have a new canvas to create on.” Corliss has translated her meticulous sharp focus technique in oils to this new technology. Corliss is one of many professional artists who are embracing the iPad. The iPad lets her create anywhere without the space requirements, supply expenses. and toxic exposure of traditional media.
Her work can be seen at www.ipadpaintings.com